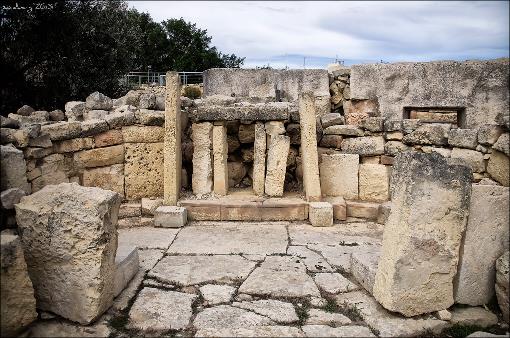 A bunch of rocks piled next to each other can often be unimpressive, unless of course they happen to form a megalithic temple.

Our islands are home to a pretty substantial number of prehistoric temples known collectively as the Megalithic Temples of Malta. There are a number of reasons why you should visit at least some of them during your stay in Malta.

First of all, Malta’s history is definitely one of its most fascinating selling points, as we keep mentioning in our blog posts. The downside to this is that it can definitely be overwhelming to inform yourself of every period of Malta’s very densely-packed story. If you’re going to start anywhere, though, you might as well start at what is literally the beginning.

Yet, the Megalithic Temples of Malta are significant for much more than just Malta’s own history. They’re a big deal for the whole world, and we’re not just waving our flag a little too boldly when we say that. UNESCO actually has several of these structures listed as world heritage sites. The fact is that these temples are some of the oldest free-standing structures of Earth. Built between 3600-700 BC, they are quite the shining example of archaeological innovation in prehistorical eras.

It’s not just the stone structures that are fascinating, though impressive they indeed are. It’s what they represent that really speaks to visitors –that in all facets of history the same questions of spirituality are asked, and that cultures inevitably revolve around those questions no matter how ‘evolved’ that culture happens to be. A trip to the Megalithic temples is not likely to offer any real answers, but it is sure to provide a resonance that you might not find in most other places.

If you’re looking for that resonance, or if you simply want to immerse yourself in these important remains from history, visiting the megalithic temples is an easy process. Read on to discover a bit more about some of the most well-known temples in Malta – but of course, we won’t give away all the secrets. You’ll have to unravel more as you explore the sites first-hand.

The first temples on the list are actually located in Gozo – Xagħra, to be precise. If you think that a trip to Gozo just to see these temples might be a waste of your time (a trip to Gozo is never a waste of time, but we digress), let us persuade you otherwise.

In fact, we’d go as far as to say that if you can only make time for one group of temples during your stay in Malta, this should probably be it. These temples are both the oldest and the largest in Malta. In fact, the name ‘Ġgantija’ actually comes from the word Giant, as it was a Maltese folklore tale that the Megalithic temples were actually built by the giants.

The two temples that make up Ġgantija have been extremely well preserved, making it really possible to understand the details of the furnishings and structure. From apses to altars, from animal bones to libation holes, there will be no doubt in your mind of Ġgantija’s significance as a place of worship and sacrifice.

Ħaġar Qim and the Mnajdra Temples

Located in Qrendi, this is another temple with interesting etymology, as the name more or less translates into ‘Stones of Worship’.

Ħaġar Qim is well-known for its particular structure, involving a central building and two lesser structures. What is most interesting is the use of C-shaped apses that make up the rooms of the temple. However, much intrigue has also been raised due to the discovery of high altar-tables, as well as statuettes of obese figures (often considered to be the Maltese goddess of fertility).

Just 500 metres away are the Mnajdra Temples, which is perhaps best-known for its southern temple which is ingeniously designed to align with the rising run during solstices and equinoxes. In other words, during the summer solstice the first rays of sun light up the megalith between the first apses, while during the winter equinox the same happens to the opposing apse.

We’re placing these two temples together because there’s only a kilometre between them! That doesn’t mean you should see these as the same structure because they are both beautiful for their own reasons.

Ta’ Ħaġrat temple in Mġarr is made up of two temples, yet is one of the smaller Neolithic structures in Malta. It’s biggest claim to fame is the discovery of beautiful Mġarr phase pottery in the surrounding village.

The Skorba site is perhaps not as preserved as some other structures, but it has been a fascinating source of information nonetheless. What we do know about Skorba is that it was revisited in later eras of prehistory. As a result, one can find both the remnants of the Ġgantija era, namely the three-apsed shape of the Ġgantija phase, as well as later monuments introduced in the Tarxien phase.

The Tarxien Temples and the Hypogeum

Both the Tarxien Temples and the Hypogeum were located in the early 20th century, which is apt considering that there is only around 400 metres between them. Both are impressive sites in their own right, and the Tarxien Temples deserve their due attention for being a shining example of Tarxien phase building, complete with detailed carvings into the walls.

Yet, these temples do tend to get slightly overshadowed by the Hypogeum of Ħal-Saflieni, and perhaps understandably considering that it is the only known underground prehistoric temple in the world. Entrance to the Hypogeum is somewhat exclusive – anyone can get in, but the site only accepts 80 people a day, so you might need to book your tour well in advance. The experience is well worth it, though.

Consisting of three distinct levels, the Hypogeum is a stunning representation of everything that makes Maltese Megalithic Temples wondrous, from the burial chambers, to the red ochre spiral paintings on the walls.