Children scream in delight, zooming past with a handful of paper confetti in their hands. Fireworks spiral their way into the air, leaving behind a trail of gleaming light. Band players huff and puff away at their trumpets and trombones, the odd thump from the bass drum echoing. Vendors call out to eager buyers, proudly showing off their wares. The statue of the patron saint looks on, quietly admiring its loyal subjects. The smell of nougat and fresh date cakes fills the air. And to think that this occurrence happens every week during the Maltese summer!

The village festa is all this and more. It is a weekly celebration, an all-out festivity which unites (and in some cases divides, but more on that later) the village community. The festa is first and foremost a celebration of the patron saint’s day, and religious commemorations still take place in the beautifully decorated churches. Each town or village has at least one patron saint, with some having two or even three. Each Sunday during the summer, you are guaranteed to find a festa taking place somewhere in Malta. Sometimes there are more than one festa taking place on the same day, especially if the churches are dedicated to the same patron saint. It is a hub of activity, offering something for everyone. Hearty food, plenty of drink and great company are usually at the centre of each festa. It is an intrinsically Mediterranean festivity, combining all the constituents of the traditional Mediterranean character – loud music and cheer, good food, friendly people and a lively atmosphere.

These celebrations date back to the 1500s, when the Knights of St John celebrated a few selected feast days with outdoor festivities. In 1777, Grand Master de Rohan encouraged the Maltese populace to take part and celebrate these religious events with great fanfare, leading up to the jovial affairs they are today. The first celebrated festas used string instruments, and traditional Maltese instruments such as ‘iż-żaqq’, to create a cheery musical atmosphere while celebrating the patron saint. However, these differed greatly from the festas we know and love today. Back then the ‘festa’ was a time when the poor man got to eat like the rich man, all in the name of the patron saint. With the ongoing years, and the decline of poverty in the Maltese islands, the ‘festa’ started to take on another hue. Although food is still quite present during festa time, and there is still some food which is associated typically with the festa, it has now taken a back-seat, and made way to a more lavish festivity. Make sure to enjoy some typical festa food while you’re there – a nougat bar will be a sure-fire hit (and makes for a great souvenir!). Each festa also has its own peculiarities. In Birzebbuga, a seaside village, the statue of the patron saint St. Peter arrives by boat. In St. Julian’s and Msida, a greased pole contest entertains spectators. The mast-size slippery pole extends horizontally over the water from a barge and competitors take turns sliding to the end to retrieve a flag, with predictable hilarious results. 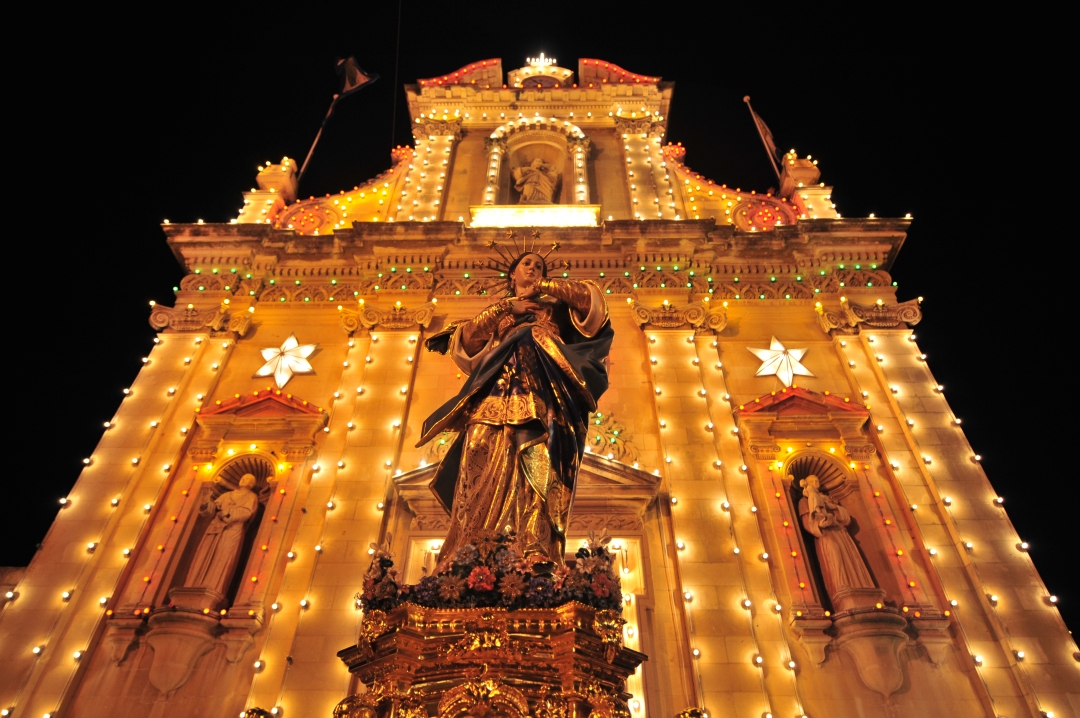 The main festa festivities take place inside the strikingly decorated churches, dressed to the nines in red damask and gold under-tones. The solemn Mass is consecrated on the Sunday of the festa week, in a service which usually takes place during the late afternoon. Then the procession commences, during which local men haul the patron saint’s statue on their shoulders, and walk through the streets of the town or village, in a sacred commemoration and adoration of the saint it represents. This is all accompanied by an array of clergymen, altar boys and finally by the parish priest. During the procession, the marching band plays holy hymns, as well as one or two hymns dedicated to the patron saint they’re celebrating. The procession generally ends when the statue-carriers arrive at the church parvis, and with a traditional run, carry the statue up the stairs and back into the church. The Maltese still very much cherish this aspect of the festa, although most use it as an excuse to show off their new outfit! However, this solemn part of the festivities still remains at the heart of each festa, even though some other aspects of the festa seem to throw all religious meaning out the door. 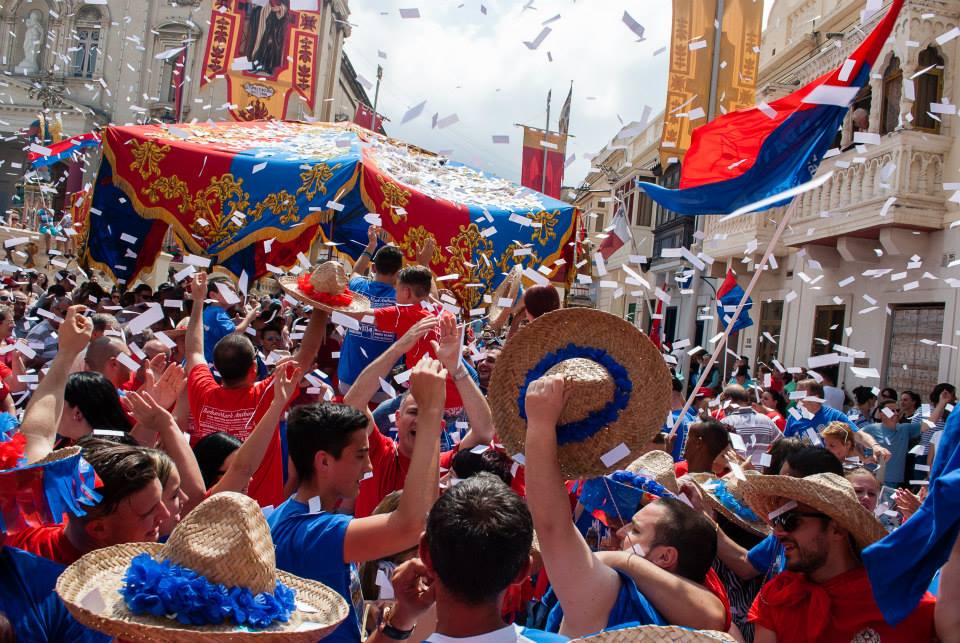 In stark contrast with the solemnity and sombreness of the religious procession Sunday evening, the usual Sunday morning festivities are characterised by noise, drunkenness and revelry. The ‘marċ’ of Sunday morning is what usually comes in mind when one thinks of a Maltese festa – paper confetti streaming the air, the marching band hollering traditional and local anthems (most of which are clamorous attacks on the rival band club), and oodles of beer! Most towns or villages have at least two band clubs, who, in typical Maltese partisan fashion, are pitted against one another. This results in a mock rivalry that usually ends as soon as the festa week is over. However, it does give the revellers someone or something to insult during the drunken debauchery of Sunday morning. One of the most notorious localities to still have this tenacious rivalry amongst its two band clubs is the town of Ħamrun, where the ‘Tal-Miskina’ and ‘Tat-Tamal’ still keep the rivalry very much alive. 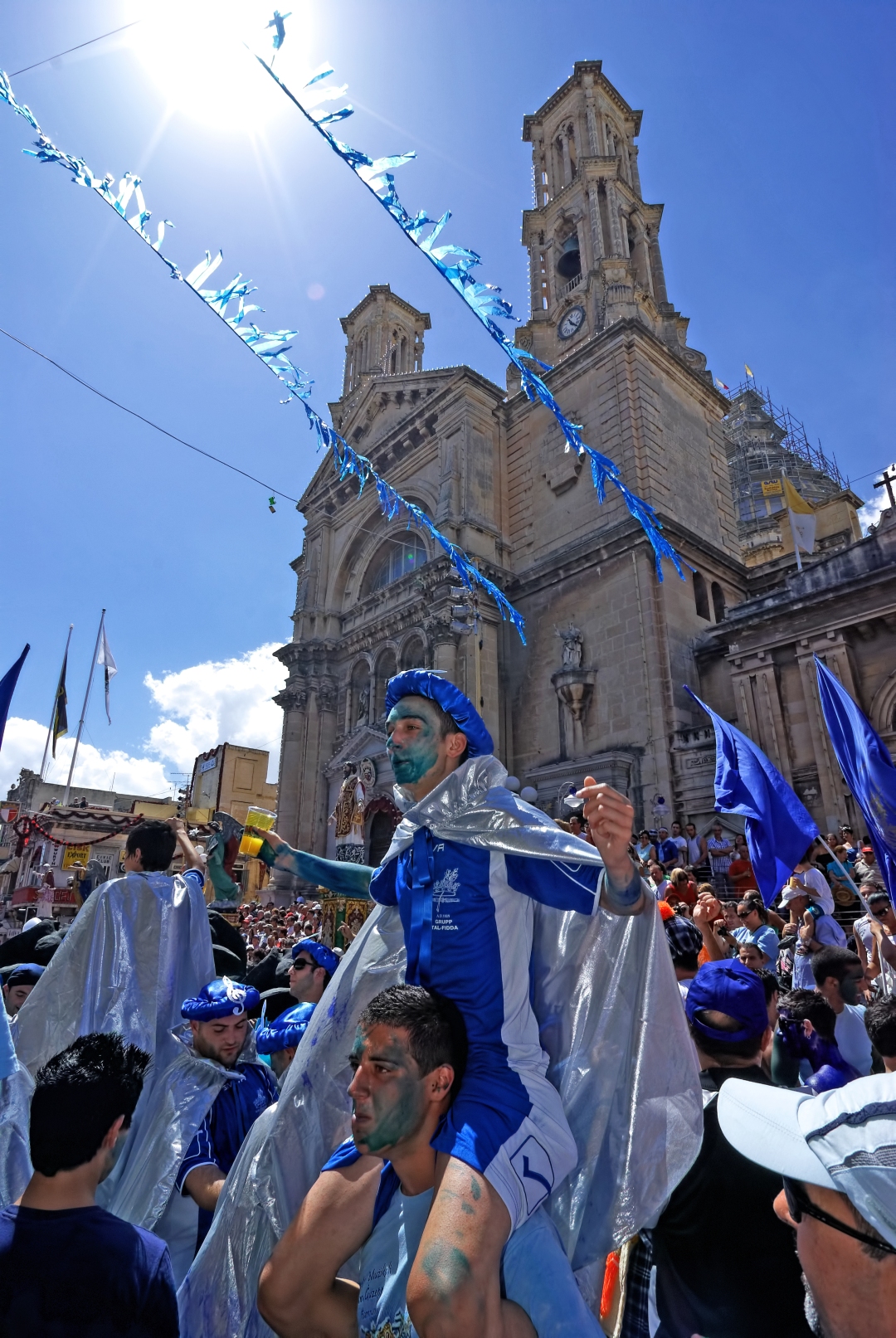 Nevertheless, the Sunday morning festivities are truly colourful affairs, full of deafening music and merry people enjoying and celebrating the saint’s day in a truly Mediterranean way. Add a good dose of Maltese summer sunshine to the mix, and you get one of the most unique and characterising aspects of Maltese culture – the Maltese festa. This distinctive feature has helped form the national Maltese character – hard-working people who take their time to commemorate and hold the sacred dear, while also being able to celebrate it in a merry festivity. The festa is an inherent part of our character as Maltese, and year after year, the festas continue to brighten our calendars with their multi-coloured fireworks and their myriad of colours.